I wanted to let everyone know I’ve got 3 new workshops added for 2015 that I’ll be teaching.

Two are back-to-back still life painting and portrait painting workshops in my hometown of Fort Myers, Florida during the month of March, both 10 days each so we can really get in lots of practice and cover lots of material.  It's some of the best weather here in Southwest Florida-sunny and warm, but not too hot!

If you can join me for one, great!  If you can get away long enough to come to both, spending the whole month, even better!  It's a relaxed environment but we still get serious about drawing, painting and oh yes...color!

Later in the summer, during August, I will be teaching a 5 day still life painting workshop in Austin, Texas. Even though it is only half the length of my other workshops, rest assured that I'm going to pack in as much information as I can!  The perfect opportunity for those who can't get away for my longer workshops.

If you want to learn more about any of these workshops please visit the teaching section of my website by clicking on the image below: 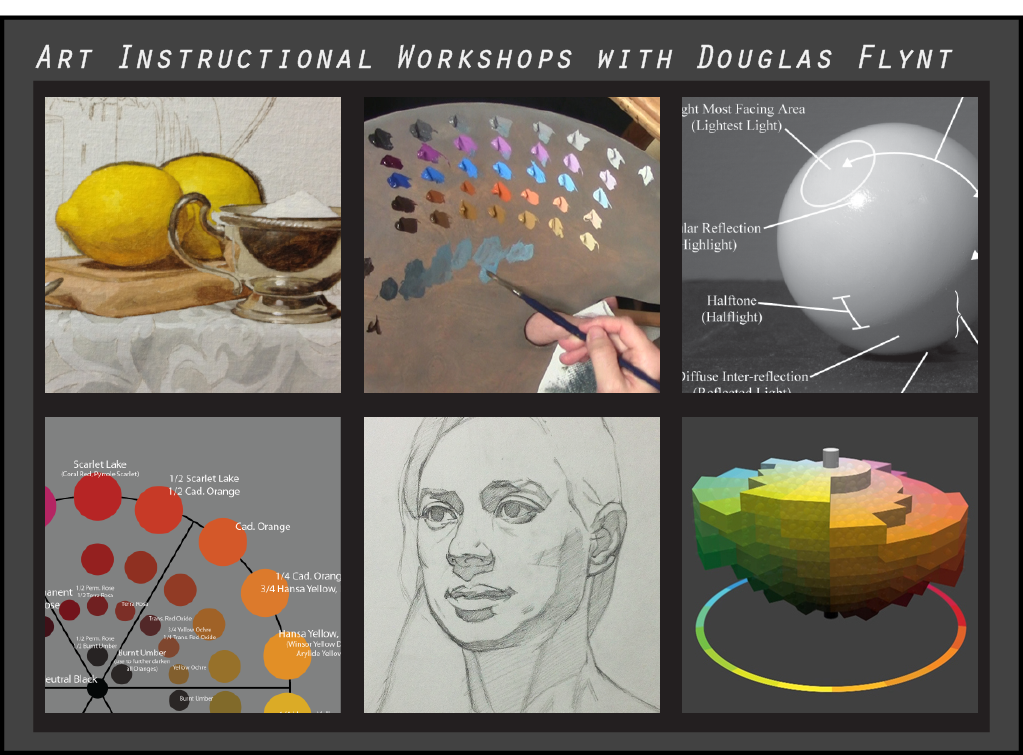 If you can participate in one (or more) of the workshops I look forward to working with you! If you're not able to make one of these this time around hopefully there will be one in the future that will work better for you.
Posted by Douglas Flynt at 12:39 PM 2 comments:


(To register or to learn more information please "click here.") 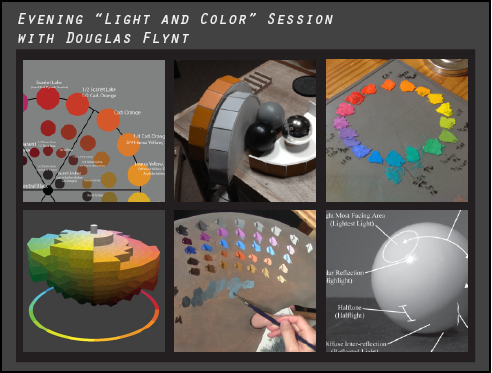 Very often color is a mysterious area for many artists, leaving them questioning not only the colors they observe but also how to consistently mix up those colors!  I know early on I had these same concerns and it took me many years to gain a color framework that took these mysteries away.

During each of my workshops I offer a lecture/discussion centered on color – establishing a common framework for all the participants to make use of during the remainder of the workshop.

For my upcoming 6 day still life workshop at the Grand Central Academy of Art I will be giving this lecture/discussion on the first evening of the workshop.   And, for the first time ever, this session will be open to individuals beyond the workshop’s participants! Through a combination of images, props and often enthusiastic hand gestures I will be sharing information on:

-Organizing colors in a color-space model.

-Understanding fundamentals of how light works and affects our perceptions of an object’s local color and its shading.

-How I go about designing a palette for a painting or a particular subject.

This approximately three-hour session will be packed with as much information as I can squeeze in — with time available for questions from the group.

If you can attend, I can’t wait to share with you the most critical ideas related to color that help me in each of my own paintings so that hopefully you can feel more confident in your own color decisions!

(For more information (including how to register) for either the workshop or the evening lecture please click "HERE."

Posted by Douglas Flynt at 2:01 PM No comments:

Cheating On My Cadmiums: Why I Replaced My Cadmium Paints 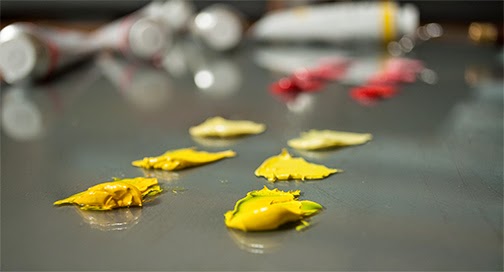 When I was an art student studying in New York City I dreaded having to purchase cadmium colors — as the proverbial starving artist I cringed at the price tag for them.  At that time any money was too much money.   But at some point I decided they were necessary and justified buying a cadmium red and a cadmium yellow light. I made do with just those two pigments for a number of years and they gave me that extra punch of chroma or intensity whenever I needed it. After awhile I found them a necessity for many projects.  At some point I ended up also adding cadmium orange to the mix. But still every time I went to repurchase them I found myself cringing at the price tag. However, by this point we had become old friends and despite the price I was so accustomed to their hue, value and chroma attributes that I automatically added them to my cart without much reservation whenever I needed a new tube.

A couple of months ago I started doing some tinkering with the colors on my palette and decided that I might look into some alternatives for my cadmium paints. And after trying a handful of different colors I finally settled on replacements for cadmium red and cadmium yellow light.  I thought I’d share those results in case there are others out there who also wanted to begin phasing out their cadmiums.

For cadmium red (PR108) I’ve replaced it with Scarlet Lake (PR255), also known as coral red or sometimes Pyrrole Scarlet.  From the reading I’ve encountered it appears to be quite lightfast receiving an “ASTM I rating.”  I like that although its hue is very similar to cadmium red light (which makes it feel familiar to me) its chroma is actually a bit higher and continues to hold up well with the addition of white paint — at least as well as the cadmium red I’ve been using. 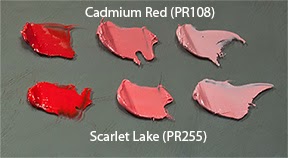 For cadmium yellow pale/light (PY35) I have replaced it with Winsor yellow (PY74), also known as Hansa yellow, Arylide Yellow or Azo yellow. This one also receives an “ASTM I” rating which I’m pleased about. And although its hue appears to display slightly less of an orange trace, when compared to cadmium yellow light, it is still close enough in hue that it, again, feels familiar to me.  It also has a slightly higher chroma than cadmium yellow light, giving me just a touch more color-space range. 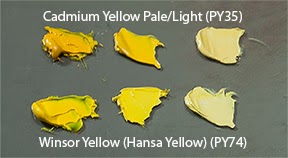 Now if the characteristics above were not enough to get me to make the switch, the price for them added that extra incentive I needed.  Both of these generally run under half the cost of their cadmium counterparts, and for the remnants of that starving artist I once knew so well, this makes me very happy!

The images in the post are works by the artist Harold Speed (1872 -1957).  I've referenced him before in my post titled The Optical and Conceptual: Components of Perception.  You can read that post by clicking "here."

Much of the time while I am painting, brushstrokes are constantly cutting across one another. Yesterday while I was painting I recalled a statement by Harold Speed from his book Oil Painting Techniques and Materials.  In the passage I was recalling he was describing “painting such details as the under eyelid…” And made the point that “Generally speaking, remember that you can only attend to one edge of the touch that you are making.  If you try and paint a touch that needs variety on both its edges, and you try and get the variety on both sides at the same time, you will fail to get either right. ” In essence when we place a stroke of paint we can only focus on the exactness (drawing and placement) of one of its edges at a time. To get the other edge to be exactly as we wish we can then recut into it with the next stroke of paint.  This is such a simple and obvious thought and yet it can be tremendously helpful at times.

Within the classically-based art circles I’ve been most associated with, Harold Speed’s two books, The Practice and Science of Drawing and Oil Painting Techniques and Materials, are well-known and widely read. If you are a representational artist and you’re not familiar with his books I would highly recommend them. The Practice and Science of Drawing can be read online for free here:

www.gutenberg.org - Practice and Science of Drawing

books.google.com – Practice and Science of Drawing

Even though I don’t necessarily paint in the exact manner prescribed by Harold Speed, I find his books are full of insightful material—every time I go back to them I seem to pick out some new bit of information. If you’ve got any useful insights or tips you’ve gained from reading either one of his books I’d love to hear about them in the comments below!

A Paint Sketch and its Role During a Commission

Recently I shared an image on Facebook.  I had originally intended to only post it there, but I was surprised by the amount of interest it received.  For this post I wanted to share that image which I believe may be interesting to both collectors and fellow artists alike.

The image below is small 5” x 7” paint sketch. Very often for commissioned work before I start the actual painting I will complete a sketch like this and present it to the client. Ideally, I prefer to present the actual sketch, rather than a photo of it, since a photo can appear quite different from monitor to monitor. Of course the commissioned painting will be considerably more detailed and carefully executed. However, a sketch like this gives a feel for the composition and colors I intend to use and I want to make sure the client is happy with the direction of the project before investing any significant time into the actual painting. With respect to this study, the client has already shared their approval and so I am moving forward!

I hope you enjoyed seeing the image and thanks for taking a look!

Posted by Douglas Flynt at 2:14 PM No comments:

I have two items to share in this quick post.  My "Painting a Still Life" video is now available on my website for purchase as a download and I have added two workshops to my 2014 calendar!

For the video I worked hard to pack as much content as I could into its roughly 74 minute time frame. It documents the creation of one of my still life paintings—taking the viewer through each of the stages involved in the creation of the artwork. Along the way I share a number of insights about my thought process and the concepts I utilized while working.

If you would like to see more details about it please visit my website by using the following link:

You can also watch the preview below if you would like:

As for the workshops, they will be held back to back—so that you might attend both if you would like.

Thanks for taking a look!

I am pleased to share a preview for my upcoming instructional video first announced a few weeks ago.

I hope you enjoy the preview!