The Optical and Conceptual: Components of Perception.

(Update 1/18/12) For a French translation of this post please click here for a downloadable PDF file:
http://douglasflynt.com/pdf_for_blog/_the_optical_and_conceptual_french_translation.pdf

For this post I thought I would share a bit about a distinction that addresses problem solving for the artist in terms of how they "see." It involves two fundamental components that make up visual perception. I have come to know these components as "conceptual" and "optical." I have seen others allude to the same concepts using terms such as impressionistic (optical) and classical (conceptual).

One of my favorite art books, The Practice and Science of Drawing by Harold Speed, has a statement which I have often felt sums up these components quite well:

"We have seen that there are two extreme points of view from which the representation of form can be approached, that of outline directly related to the mental idea of form with its touch association on the one hand, and that of mass connected directly with the visual picture on the retina on the other."

In the same book the author cites work by Michelangelo and Degas to further exemplify the distinction between the two concepts by offering the following (I have supplied an image for each artist although they are not the same images referred to in the book):


"In the Michael Angelo the silhouette is only the result of the overlapping of rich forms considered in the round. Every muscle and bone has been mentally realized as a concrete thing and the drawing made as an expression of this idea. Note the line rhythm also; the sense of energy and movement conveyed by the swinging curves; and compare with what is said later (page 162) about the rhythmic significance of swinging curves."


"Then compare it with the Degas and observe the totally different attitude of mind in which this drawing has been approached. Instead of the outlines being the result of forms felt as concrete things, the silhouette is everywhere considered first, the plastic sense (nowhere so great as in the other) being arrived at from the accurate consideration of the mass shapes." 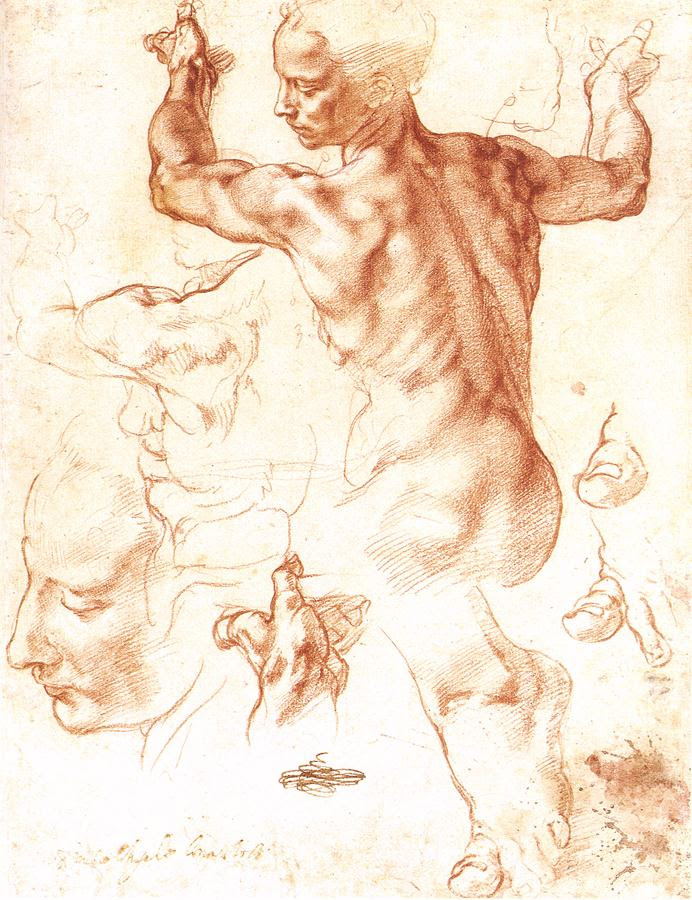 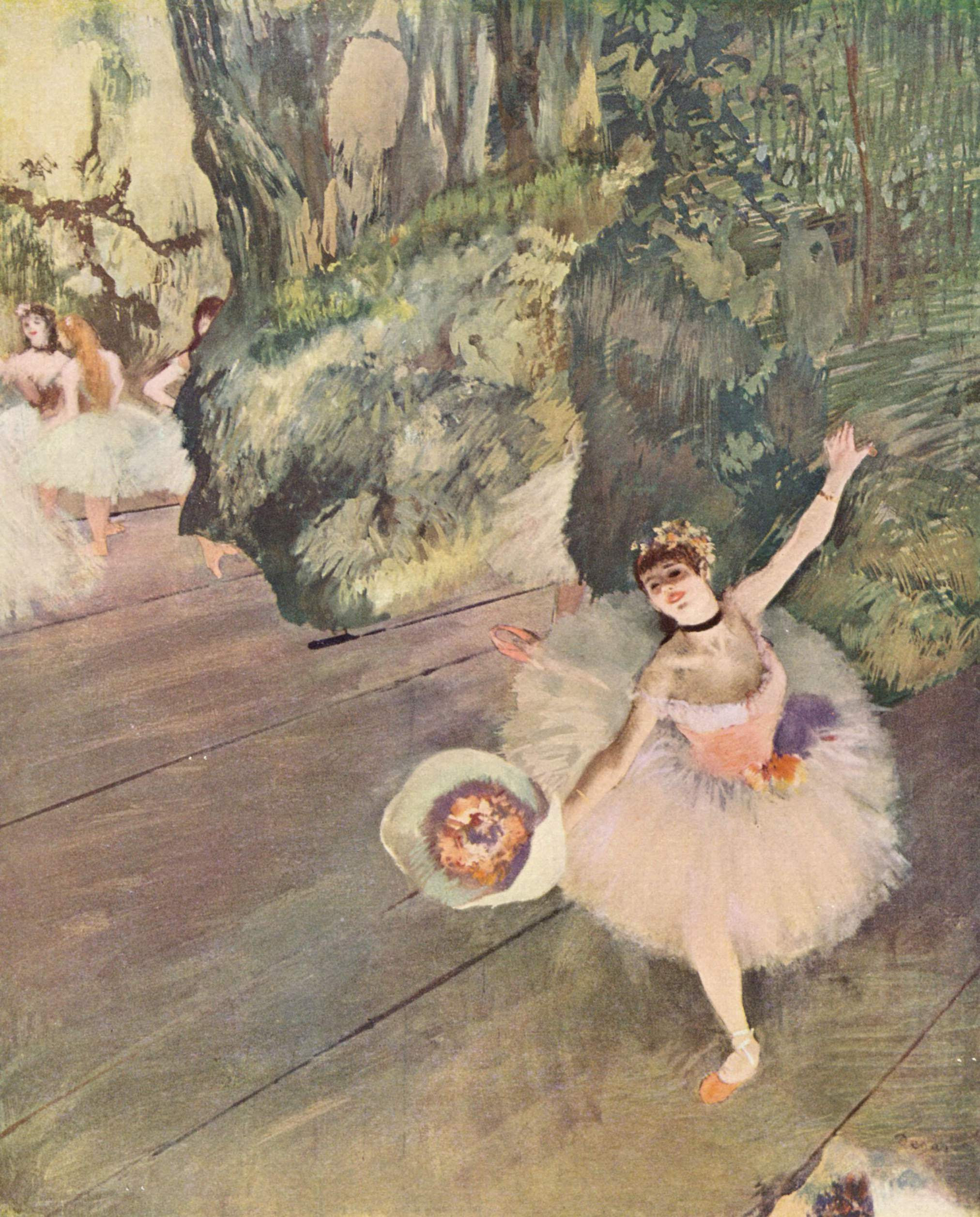 I sometimes like to think of the optical as the data our eye sees. It is compiled of non-representational shapes (masses) of patterns and color. It is associated with the 2-dimensional picture plane or an impression upon the retina. In contrast the conceptual is the mental understanding or visualization of what is being seen. It is the understanding of an object in terms of how the mind comprehends it based off prior experience or knowledge. It is often simplified or idealized to it make it easier to grasp. It is often associated with 3-dimentional, spatial, geometric and structural ways of thinking and problem solving. When this optical data is filtered through our conceptual understanding the result is our perceptional experience.


Ok, so why is all of this important. Well whether they are conscious of it or not it defines for many artists how they look at things and choose what to look for. Although greatly oversimplified, I have previously described impressionistic painters and classical painters thusly:


Realistically I don't think any artist's work is wholly formed conceptually or optically—although philosophically many seem to favor one approach over the other. For myself I think that all of the questions posed above, both optical and conceptual, are useful. I assume that they should lead me to the same conclusion. Yet that conclusion is formed by meeting my conceptually understood experience thus grouping me more as a classical painter as I previously defined it.

There is so much more that could be said on this simple distinction. However for the readers who are artists I hope it may make you more aware of how you see and for the art collector and enthusiast I hope it will give you more insight into the thoughts of the artists whose work you enjoy.

Just a little food for thought.

An Addendum passage from Harold Speed:


I have included a larger passage below from Harold Speed's book that ties into what has already been said. I wanted to add it on because it has been insightful to me but I couldn't see a good way of working it into what I wrote above.

"To sum up this somewhat rambling chapter, I have endeavoured to show that there are two aspects from which the objective world can be apprehended. There is the purely mental perception founded chiefly on knowledge derived from our sense of touch associated with vision, whose primitive instinct is to put an outline round objects as representing their boundaries in space. And secondly, there is the visual perception, which is concerned with the visual aspects of objects as they appear on the retina; an arrangement of colour shapes, a sort of mosaic of colour. And these two aspects give us two different points of view from which the representation of visible things can be approached.


When the representation from either point of view is carried far enough, the result is very similar. Work built up on outline drawing to which has been added light and shade, colour, aerial perspective, &c., may eventually approximate to the perfect visual appearance. And inversely, representations approached from the point of view of pure vision, the mosaic of colour on the retina, if pushed far enough, may satisfy the mental perception of form with its touch associations. And of course the two points of view are intimately connected. You cannot put an accurate outline round an object without observing the shape it occupies in the field of vision. And it is difficult to consider the "mosaic of colour forms" without being very conscious of the objective significance of the colour masses portrayed. But they present two entirely different and opposite points of view from which the representation of objects can be approached. In considering the subject of drawing I think it necessary to make this division of the subject, and both methods of form expression should be studied by the student. Let us call the first method Line Drawing and the second Mass Drawing. Most modern drawing is a mixture of both these points of view, but they should be studied separately if confusion is to be avoided. If the student neglects line drawing, his work will lack the expressive significance of form that only a feeling for lines seems to have the secret of conveying; while, if he neglects mass drawing, he will be poorly equipped when he comes to express form with a brush full of paint to work with."

Posted by Douglas Flynt at 7:13 PM