I often get regular questions regarding the kind of lighting I use in my studio. At this time I do not have the good fortune to have natural light in my studio. However during my studies I became somewhat accustomed to some of the characteristics of natural light and so a number of years ago I started experimenting with building my own light boxes to try and gain some of those characteristics. After building a few lights a number of other artists who saw them asked about building some for themselves and so I put together a few photos of how they were built. Below is a photo of how I often set up for small still life pieces and some shots that I took while makes changes to one of the lights. I thought I would share the process and the materials involved incase it is useful for others out there. And incase you're not the tinkering type, I also put some links at the end to some lights on the market which may serve you just as well. Have fun taking a look! 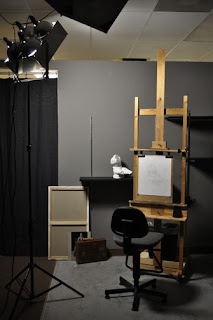 Here is the setup I often use for small still life pieces.  The light has a mixture of compact florescent bulbs—usually four 6500K bulbs and one 5000K bulb.

Photos 1 and 2 show the basic body of the light. This is the first light I built like this and I took these photos while making some modifications to it—upgrading the older design. On this model I used nuts and bolts with lock washers to fasten things together. For future models I used rivets which I would recommend.

The 4 light reflectors are 8 inches in diameter. The aluminum frame was constructed with 1/16" by 1/2" "L" channel lengths of aluminum. The rivets are 1/8" "medium" length aluminum rivets. The basic outer dimensions of the frame are 16" x 16" x 6" (not including the light reflectors).

Photo 3 shows one of the 6" lengths of aluminum.

Photos 4 and 5 show the piece that I fabricated so I could attach a handle. These were attached at the center on two opposite sides of the 16" x 16" frame (side attached to the reflectors).  The piece was cut from an 1/8" thick "L" channel length of aluminum.  It is approximately 2" in length.  The hole has threads that accept a 1/4" #20 bolt.  It was created using a "T handle or a tap wrench" and the correct sized drill bit.

Photos 6, 7 and 8 show a smaller different light I constructed that has a "U" shaped channel (made by adding an extra "L" channel) on three sides. I later decided this was perhaps the best way to go in order to hold the diffusion lens to be made later.   The channel is a gap of about an 1/8th of an inch.

Photos 9 and 10 show an extra center light that I added by cutting down another aluminum reflector.  They also show the start and finish of enclosing the sides and rear openings.  To do this I used aluminum flashing and rivets. On the rear I left the four corner spaces open to allow for air to circulate, helping to dissipate the heat.


Photos 11-15 show the arm handle/bracket that I fabricated so that the unit can be tilted and mounted on a sturdy tripod. Most of the handle/bracket was constructed with 1/8" thick 3/4" "L" channel lengths of aluminum and 1/16" thick 1/2" "L" channel lengths of aluminum for the corner braces. At the ends that attach to the light's frame I drilled 1/4" holes for carriage bolts to go through. I then threaded a 1/4" # 20 carriage bolts through the pieces I had earlier tapped out (to create threads)—adding spacers, washers and large nylon wing nuts which can be tightened down so that the angle of the light can be locked in place.

Photo 16 shows a tapped out hole (to create threads) put at the center of the u-shaped handle/bracket so that the whole unit can be put onto a sturdy tripod.

Photos 17 and 18 show the diffusion lens in place and by itself. I cut it down from a 2' x 2' piece I purchased. I cut the corners off to allow for air to circulate dissipating heat. I also sanded the edges to remove sharp spots and lessen the likelihood of it cracking.

Photos 19 and 20 show the bulbs added and the light sockets attached. I later wired all of the cords together into one plug.

And finally the light in action again! As promised here are some links to some lights that should give a similar result: