The Link between Value and Chroma

(Update 1/18/12) For a French translation of this post please click here for a downloadable PDF file:
http://douglasflynt.com/pdf_for_blog/the_link_between_value_and_chroma_french_translation.pdf
Since posting the articles about light on form I have received a number of questions regarding the link between chroma and value. Because of this, I thought I would put together a few diagrams to help illustrate how I think about the two. Please keep in mind they are approximated for illustration purposes only and are limited by my inexperience with the software programs I created them with.


In order to understand how value and chroma are related I first distinguish between the specular and diffuse components of light (which I discussed in the earlier articles). With this distinction I can analyze what is happening to both separately. In areas of diffuse reflection (form-light) the appearance of value and chroma are linked because they both shift with the amount of light the surface receives to begin with. As I previously explained in The Anatomy of Light on Form: Part I:

“As the surface angles away from the light source fewer light rays, or streams of photons, can strike any given unit of surface area. Fewer striking light rays means less light is later re-emitted to carry the information about the local-color of the object to our eye. Absence of light is perceived as darkness or achromatic blackness—as when all lights are turned off. With less light reflecting the local-color back to the viewer's eye the amount of darkness increases causing the local-color's appearance to simultaneously darken in value and weaken in chroma”

It is useful to think of areas composed of specular reflection (like high-lights) as obscuring or overriding the diffuse reflection one would normally see. It is also good to remember that the more light an object receives the greater its potential to display its true local color as long as the areas being viewed are not affected by specular reflections. In areas of form dominated by diffuse reflection the greater amount of light will visually increase the chroma (getting us closer to the object’s true local color) rather than “washing it out,” as is often seen in an overexposed photograph.


Within a color space model such as Munsell color space, once the local color is known (found where the object receives the most light not obscured by specular reflection) a straight line proceeding from that point toward the bottom center (achromatic black) displays the trajectory its appearance will follow as the light diminishes. This path also reveals the linked rate of darkening in value and weakening of chroma that we should expect to see.

For myself I don’t actually chart this trajectory for given objects but approximate it by eye and feel as I paint. This is much in the same way as I might conceive of an object’s vanishing point in space without actually drawing in the orthogonal lines used in perspective drawing.

The following image shows a much approximated rendering of an orange sphere and a slice of color space (again much approximated in both its construction and line trajectory) containing the color pathway the loss of light would create. 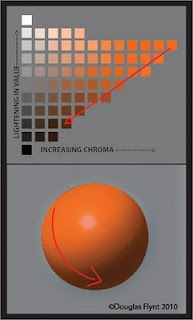 The next image instead shows the deviation from that path which would occur if we were to go through a region of specular reflection in the form of a highlight and assuming a achromatic (white) light source. In this highlight region the pathway will move toward the upper center of color space (achromatic white) and then return to the original pathway upon exiting it. 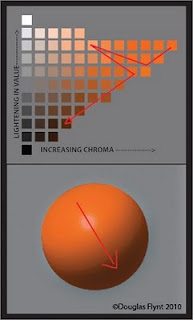 It should be noted that this pathway may in reality be further altered by other factors such as diffuse inter-reflection (reflected light) or diffuse transmission (translucency).
The following images show another example of these pathways for a different local color. 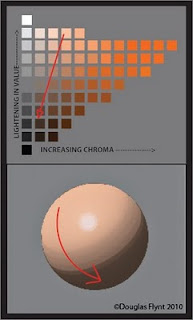 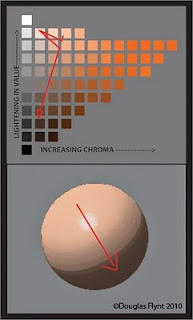 I hope the illustrations I have offered give a sense of how a person might conceptualize the relationship between value and chroma. Thanks for stopping by.
For more authoritative reading on this subject I would highly recommend David Briggs’s website, http://www.huevaluechroma.com/. The following excerpt further addresses what has already been said and also denotes that the main path of diffuse reflection in color space (without other variables) falls along a “line of uniform saturation:”


“If a surface of uniform colour turns progressively away from a single light source, the diffuse reflection from its surface steadily decreases in brightness. We would of course expect to represent this in a painting with a series of colours diminishing in lightness, but what would be the chroma of these colours? The answer lies in the fact that because the colour of the illuminant and the colour of the surface are both constant, the proportion of the different wavelengths in the reflected light will not change. Consequently the hue and saturation of the reflected light remain constant, while the brightness diminishes. The series of colours we use to represent such a surface, here called a shading series, should therefore lie along a line of uniform saturation; such lines radiate from the black point of the colour solid (Figure10.1). Along such a line, chroma decreases steadily as lightness decreases, at the precise rate necessary to keep the saturation of light from the surface constant.”