Update on the Link between Value and Chroma

(Update 1/18/12) For a French translation of this post please click here for a downloadable PDF file:
http://douglasflynt.com/pdf_for_blog/update_on_the_link_between_value_and_chroma_french_translation.pdf
After my last post I had an e-mail exchange with Dr. David Briggs (who I had referenced in the post). He had some further information to share regarding the subject I was writing about along with some accompanying images. The information he shared concerns the anticipated trajectory through color space that occurs with a loss of light—particularly a distinction between computer color space models such as HSB or HSL and Munsell Color Space.”

In light of this new information I wanted to share his comments and images.  You will find the images directly below his text.

"These lines we are drawing represent the set of points where, as brightness varies, the balance of wavelengths remains the same. Technically, these are called lines of uniform "chromaticity". As I've said on Dimensions of Colour, these lines maintain uniform HSB "hue" (H) and "saturation" (S), and appear in YCbCr space (the space I used for many of my illustrations) as perfectly straight lines radiating from the point of zero light energy.


More recently I've been looking into how these lines appear in Munsell space. The Munsell chroma scale fundamentally has a visual basis, and there is no in-built theoretical relationship between chroma and saturation. Nevertheless Ralph Evans reported that when projected onto a hue plane, paths of uniform chromaticity (and therefore uniform saturation) delineate simple straight-line relationships between lightness and chroma (Fig. 1, from Evans, The Perception of Colour, 1974). Surprisingly at first, however, these lines radiate from a point roughly one and a half Munsell value divisions below the Munsell zero value. I believe that this is because the Munsell zero value represents the light energy at the visual threshold of blackness, while the chromaticity lines are radiating from the actual point of zero light energy. Perhaps also surprisingly, for many hues these lines are somewhat curved when viewed on the hue plane; that is, as brightness changes they drift slightly in Munsell, i.e. perceived hue (but not in HSB "hue", H). Zsolt Kovacs' wonderful program drop2color has a facility for factoring in different brightnesses of illumination on paint colours, making it easy to illustrate these paths (Figure 2, 3).

I think an important practical consequence of these relationships is that the shading series for a brightly coloured surface goes nowhere near black paint! (Figure 2). This would explain why black paint is unsatisfactory as the darkest value of strongly coloured objects - for these it seems you might need to use the highest-chroma deep dark you can hit. I'd be very interested to know if you agree." 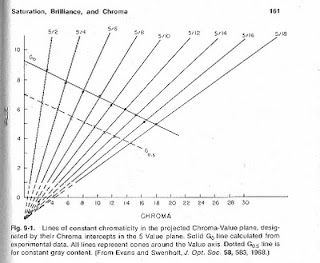 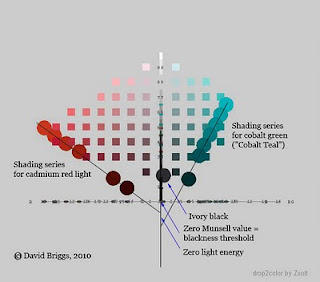 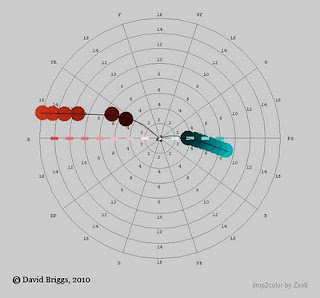 The implications are that the premise for the trajectories I offered in the post will continue to hold reasonably true in computer color space models such as HSB but that a visualization for this trajectory in Munsell Color Space would be somewhat altered. When visualizing the trajectory in Munsell Color Space we need to visualize a base line trajectory from an object’s local color to a location below Munsell’s zero value. Additionally, a certain allowance would have to be made for some slight hue drifts from a true straight line trajectory.

I hope that others will find this information useful just as I did. Thanks David.
Posted by Douglas Flynt at 9:55 AM